MORE REJOICING OVER ONE THAN OVER NINETY-NINE​ 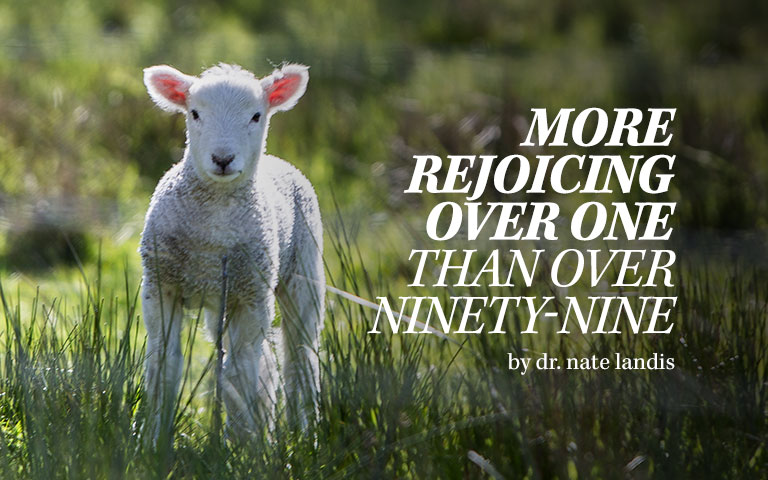 I lost a kid on my shift at camp one summer.

Our church was up at Forest Home, a large and beautifully expansive camp near San Bernardino.  I had 65 middle school students under my care.  After three hours of free time, a volunteer came running up to me in the cafeteria with a look of panic on his face.  “Markus (name changed) did not check in after free time,” they told me, “no one knows where he is.”  I thought to myself, “Not on my shift.”  There’s a lot of paperwork when you lose a kid at camp.  So I started asking around during dinner, “When did you see him last,” “when did you see him last,” “when did you see him last.”  There kids told me the same story.  They said, “We saw him in the creek playing down by the river bed right before the flash flood washed through this afternoon.”  Every few years at this camp, storms can push a surge of water down from the mountains.  It overflows the banks, floods the cabins, and then subsides as quickly as it came.  The alarms, sirens, and flashing lights had gone off that day to warn of the impending high waters.  So immediately we all started looking for this lost kid.  All of my staff put their forks and knives down and start canvasing the camp.  The entire paid camp staff put their utensils down and starting looking.  No one filled out a spiritual gifts inventory to find out if they felt called to youth ministry, evangelism, service, or search and rescue.  They just knew this is a life and death emergency and we had to find this kid at all costs.

We had to go get him and bring him back.

I started crying and I prayed some of the most sincere prayers of my life as I walked throughout the camp frantically looking for him.  I know I have about twenty minutes left before I have to call his mom.  Can you imagine that conversation?  “The kid you love and trusted me with, your own flesh and blood,” I would have to say, “is lost on my shift.”  I got to the big bridge over the river that separates one section of camp from the other.  I looked right.  I looked left.  I shouted his name and listened to it echo in the mountains.  As I surveyed the river, I was praying to God that I did not see a brown hump shaped like a junior higher washed up alongside the bank.  But that’s what was going through my mind.  I’m praying.  I’m crying.  I’m hurt.  Nobody is answering.

Finally, I get to the center of the camp and arrive at the bookstore.  The double doors of the bookstore suddenly burst open and groggy-eyed kid, Markus – the one we were looking for—comes staggering out.  Now I’m an appropriate side hug –I love you but I’m not getting sued—youth pastor usually.  But when I saw this kid who was dead and now is alive, who was lost and now found, I lost all composure and I just ran to him.  And I picked him up and I pulled him close.  I think I really scared him.  I said, “Markus, you don’t know how good it is to see you.”  “What happened?”, I asked.  “I found a really good comic book series and lost track of time,” he told me.  “I have been reading in the bookstore for the last four hours.”  Now when you work with kids that are into gangs, and drugs, and homicides, as long as they’re alive, it’s a good thing.  So for me, he could have said anything.  He could have said, “I was sampling crystal meth for the first time in the bookstore.”  I would have said, “Markus, I don’t support that behavior but at least you’re still here and we can work with you.”  There is always a chance to make a wrong decision right if you are still alive.

I was so overjoyed at having him back that I literally threw him onto my shoulders when we got back to the cafeteria.  When we entered the room together, there was more rejoicing over the one junior higher that was lost than over the 64 others that never needed to be found again.  It was exhilarating!  That’s what fishing for men and women is all about.

That’s the joy of seeing the lost come home again.