GOD WANTS HIS KIDS BACK​ 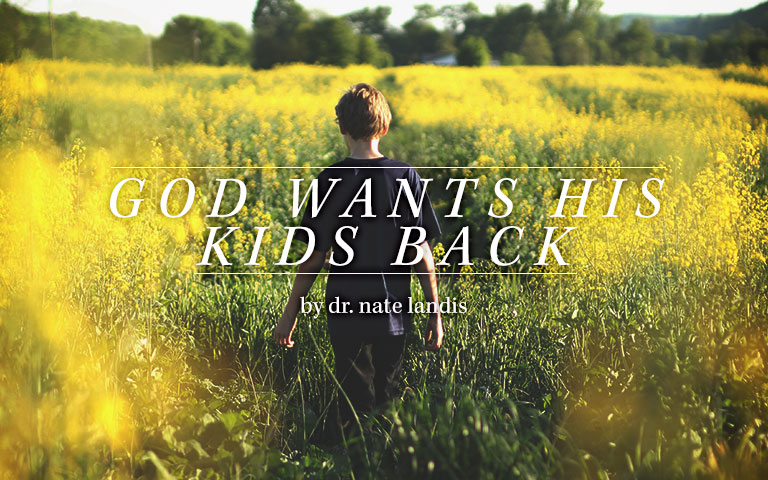 That day, I became a dad for the first time.  After 24 hours of labor, my son Russell Anthony Landis came into the world.  A sense of wonder filled the room as I held him in my arms and looked deep into his clear blue eyes.  He starred attentively back at me during a sacred encounter that changed me forever.  I could see my face in him and he could see his face in me.  I thought to myself, “What a good looking kid; he looks a lot like his dad.”  No, I’m kidding.  Seriously though, my first thoughts as a father fixated on the fact that I was holding a literal miracle in my hands.  I donated some DNA but I did not string his organs together inside his mother’s womb.  I did not tune his eyes to match the frequency of light on our planet.  Nor did I place a hunger for eternity and transcendence inside his soul.  God did all those things, not me.  In that breathtaking moment, I found myself the steward of another human life.  What an awesome, scary, and humbling reality.  A sense of selfless love for Russell rushed over me.  For the first time ever, I personally felt a fraction of the love God must feel for every person on planet earth.  Almost spontaneously, I began making commitments to my son.  I would provide for him.  I wanted to protect him.  I vowed to do everything in my power to give him life to the fullest.

Then, without warning, two nurses hurried into the hospital room and fastened an electronic ankle bracelet on my son’s ankle.  “Mr. Landis,” they said, “do not take a wrong turn while holding your son in our hospital because we are monitoring his every move electronically.”  They continued, “If you go down the wrong hallway with Russell in your arms the entire hospital facility will immediately go into lockdown.”  I thought to myself, “Great, my kid is only two hours old and he’s already on parole.  I have failed as a father already.”  So I had to ask them why they put a baby LoJack on my son’s ankle.  One of the nurses explained that one out of every 2,000 babies in California get stolen from hospitals at birth.  Now I have read different statistics.  Some sources report that 1 out of every 200,000 babies get stolen from hospitals at birth.  But the point is the same.  Hospitals in California take definitive action to make sure that not one baby gets lost on their shift.  Loosing just one kid is completely unacceptable to them.

According to Jesus, God the Father has a similar acceptable casualty rate for young people.

In Matthew 18:10-14, Jesus tells the parable of the lost sheep and makes it clear what God the Father’s acceptable casualty rate is for kids in our city.  He asks:

“Which of you if he has 100 sheep and one goes astray will not leave the 99 and go in search of the 1 that was lost?  And when he finds it there is more rejoicing over the one that was lost than over the 99 that never needed to be found.  In the same way, it is the will of my father in heaven that not one of these little ones be lost.”

According to Jesus, then, God’s acceptable casualty rate for kids in America is zero.

In my home city of San Diego, the math looks different.  Where I live only 10% of public middle and high school students have a regular or meaningful relationship with a local church.  That means we have to ask churches if they are willing to leave the 10 in the church to go after the 90 in our public school system.  This does not mean that we neglect or ignore the 10, it simply means we make finding lost people a priority.  That is the mission Christ has called me to:  to seek and save the lost…while mobilizing churches to do the same.  Followers of Jesus in my city and throughout America cannot settle for a higher youth casualty rate than God or hospitals.